This chapter provides "step by step" instructions for using Matrix42 OS Deployment - based on WinPE.

Generally, this variant of the deployment is based, on the one hand, on a WinPE-based PXE boot image that starts the Matrix42 Universal Agent Framework at boot time. The Matrix42 Universal Agent Framework then ensures that the booting computer connects to the assigned Empirum Server and executes the assigned Matrix42 PreOS packages. For the connection to the Empirum Server, the specifications in the selected agent template are used.

A Matrix42 PreOS package can be imported like a software package via the Matrix42 Management Console and is then available in Empirum.

Do not select the Delete packages from directory after successful import option to keep the Matrix42 PreOS packages in the source directory.

If the Matrix42 PreOS package already exists, the Import Wizard will ask if the package should be imported anyway. If the import is performed, an error will occur. Matrix42 PreOS packages are always imported into the register specified in the configuration file (EmpirumPackageData.xml) of the package. This behavior is different from the behavior when importing software packages. If one starts there the import over a special register (for example software), then the software packages which can be imported are stored also in this register.
If no Matrix42 PreOS packages are available yet, the order of the packages is set based on the specification in the configuration file (EmpirumPackageData.xml) .
If a version of a Matrix42 PreOS package already exists, then its position in the register is first determined during the import and transferred to the new package to be imported. The new version of the package is then displayed directly below the already existing version.

It is very helpful if you first configure the required PreOS packages for the respective action via Configuration > View Designer. Afterwards, these can simply be assigned to a group via drag & drop. Description of the PreOS packages

The description of the individual PreOS packages is in alphabetical order.

A detailed description of this PreOS package can be found here.

This PreOS package can be used to create an image from the hard disk of a computer that can be used as a master image for disk imaging. For configuration the collection of computer variables 'M42_INTERNAL_OS_IMAGING_CREATION' must be used.

For the later rollout, make sure that the user used has access to the target path and that the path specified under DESTINATION (including all subdirectories) is actually created.

This PreOS package can be used to install a disk image (a VHD created by DiskImageCreate) on a computer's hard disk. The target disk must be the same size or larger than the source disk image. Check both the PXE log and the disk image log (if present) to ensure that the disk image installation was successful.

For configuration, the collection of computer variables 'M42_INTERNAL_OS_IMAGING_SETTINGS' must be used. The client configuration is supported by the DiskImageDeploy package variables.

Variable definitions from the DiskImageDeploy package:

The DiskPartitioning package is responsible for partitioning the hard disk. The configuration of the partitioning is controlled by the package variables.

Running the DiskPartitioning package switches the package status of all previously installed packages to YELLOW, even if they were GREEN shortly before. Since a complete deletion of the hard disk takes place here, the previously determined status can now no longer be correct.

Example of a variable configuration: Example of a configuration file with a percentage partitioning with two partitions named Data2-1, Data2-2 and a total of 66% disk space usage:

This PreOS package is used to add a computer to a domain or workgroup. If the domain is not selected, then even if the Matrix42 PreOS package DomainJoin is assigned, no domain join is performed and the computer is added to the specified workgroup. 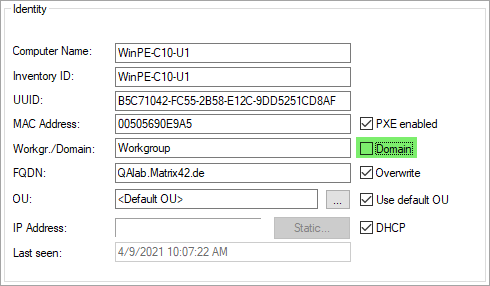 The function "Move to another OU" is only available from the OS installation of Windows 10 from build version 1809!

On the other hand, the WindowsInstallation package can be used without the DriverIntegration package - if no additional device drivers are needed for the operating system installation.

For driver integration, the required drivers must be available as an archive (CAB or ZIP file) or as a folder structure. These files must be located on the server under  \\%EmpirumServer%\Configurator$\Packages\Matrix42\OsPackages\Drivers\. If there is no Drivers folder, it must be created first.

Starting with WinPE PreBoot Support 1.8.16, drivers in EXE format from Dell can also be integrated. Please note that these driver files are up to 4 GB in size - the RAM on the computer on which this driver package is to be installed must be correspondingly large (8 GB).
EXE files from other manufacturers can also be integrated.
For this, the variable "ExeUnpackOptions" must be added to the variable set "DriverIntegration" as control element "Text" under "Variable definitions".
For Dell, the following call for unpacking (in the PowerShell script) was integrated: /s /e=%targetpath%.
For another manufacturer, the call parameters can vary, but the target path where the driver package is unpacked must always be %targetpath%!
Files in EXE format can only be integrated by one manufacturer - so either Dell, or Lenovo, or HP!

More information can be found in the WinPE Driver Integration - HowTo.

The EmpirumAgentSetup package is executed to install the Empirum Agent on the client.

The M42_AGENT_PUSH_PACKAGE_FOLDER.Windows variable is used to specify the version and variant (Matrix42 Advanced Agent or Matrix42 UEM Agent) of the Empirum agent.

The value of this variable is a relative path to the desired agent directory starting with the folder located at "Configurator$\Packages\Matrix42\". For example:

For the three variables "RemoveFromADUser", "RemoveFromADPassword" and "RemoveFromADDC" the RSAT tool is required. This tool can be used to delete a computer from the AD at the runtime of EndOfLife - independently of Empirum-LDAPSync. For this, the value for the variable "RemoveFromAD" must also be set to "1".
More information on how to integrate the tool can be obtained from Matrix42 Support.
To remove an AD object, you need the rights:

Information about this is described by Microsoft here.

This PreOS package is a sample package that starts the hardware tool to collect information about all devices on a client to provide in the client's log.

This PreOS package can be used to install Windows language packages (Local Experience Pack or the CAB file format) and to set the display language configured in the WindowsInstallation package variable UILanguage.

Smooth operation of LXP's is supported with Empirum v20.0.
Local Experience Packs (LXP/APPX language pack formats) are only supported from Windows 10 version 1809 upwards. Only installations with an English (EN-US) base system are supported. All other base languages are only supported experimentally. The UILanguage/desktop language can be set user-specifically via the Windows "Regions and Language" dialog.
Known issues from Microsoft to LXP's: Language packs known issue | Microsoft Docs

This PreOS package is a simple sample package that turns off PXE activation on a computer and sets the status of the currently running PreOS package to Reboot Needed Immediately.

The following packages are required for this:

- and after Windows installation -

The execution order of these packages is important and must be ensured.

When deploying server operating systems, the server name must be included when specifying local users, e.g. "%ServerName%\LocalUser". Do NOT use ".\LocalUser"!

For a successful operating system installation, the following variables must also be configured.

Before the Windows operating system (ISO) files can be imported, the Windows Assessment and Deployment Kit (WADK) 10 (2004 or newer) must be installed on the (master) server.

Boot configurations can be used to create a WinPE based PXE boot image based on the Windows ADK installed on the Empirum Master Server.

To use WinPE, an actual .NET and an actual Power Shell version (minimum 5.1) is needed! Only alphanumeric characters (a-z, A-Z and 0-9) are allowed for the name.
Names must be unique. The use of reserved names is prevented.
This includes names that are already used in the boot diskette configuration (EPE).
The

symbol indicates that the entry is not allowed.

The entries in the selected agent template determine how and with which server it will attempt to connect during OS deployment.
If no entry is displayed in the selection under Agent Template, first create an Empirum Agent Template via Configuration > Software Management > Empirum Agent.
In addition to the user name, password and server name, the settings for the DHCP options are also transferred to the PXE boot image, provided it has been configured in the agent template. Afterwards, the selection can be updated via the Refresh

button. The overview on the left is updated in real time. However, changes

are only permanently applied after confirming with Save.

Self Provisioning is described in detail here.

After saving the Empirum Preinstallation Environment configuration, the automatic creation of the PXE image is taken over by the Backend Task Queue extension.
After the PXE boot image has been successfully created, it is displayed with the specified name in Management > Administration under PXE-BootImages and can be assigned as usual using drag & drop.

The current jobs in the Backend Task Queue can be checked using the following dialog in the Matrix42 Management Console (EMC):

The queue entries named PE (= Preinstallation Environment) are the jobs of interest for creating the PXE image.
The list shows which jobs are currently being processed by the queue.

The BTQH service must run under a user who has administrative rights.

In the Back-end Task log tab, the status of the jobs that have already been processed can be viewed.
The Result column shows the success of the order. In case of failure, the Note column contains detailed information about the error.

After saving, this variable configuration is displayed in Management > Administration under Variable Configurations and can now be assigned via drag & drop. On the configuration side, all preparatory measures are now complete.

In order for a computer to run the OS deployment via WinPE, the settings in the administration still have to be made.

In general, it is possible to assign multiple Matrix42 PreOS packages, which are then executed one after the other when the WinPE-based PXE image is booted.
The execution order of these packages can be controlled globally via the order of the packages in the depot, as with other software packages. Once all assignments have been made, the computer can be activated via the context menu.

Starting with WinPE support package 1.8.13, all PreOS packages in the WinPE phase are restarted if a package runs into an error. The behavior can be changed manually (see FAQ).

If you want to customize the WinPE boot configuration and e.g. change the background image or texts, you can find instructions here . 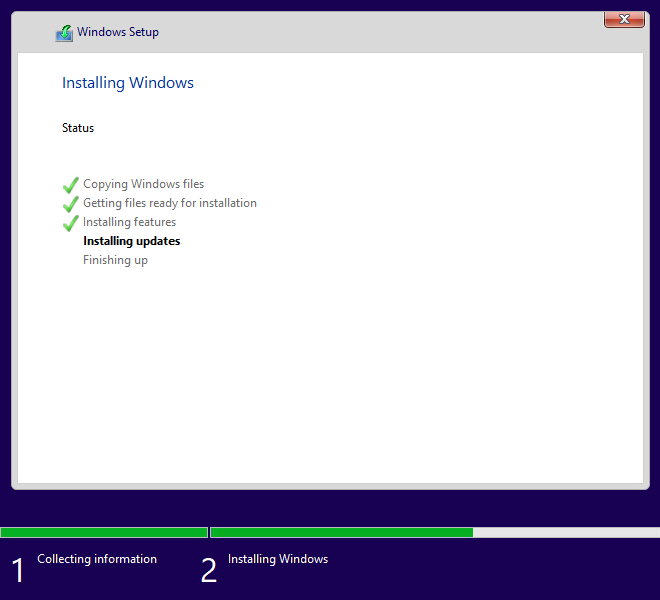 After going through the various installation phases, the operating system is installed on the computer.

During the operating system installation with these packages, several reboots take place. The operating system is executed several times during this process. During this, the PE agent executes the associated packages: LanguageInstallation, DomainJoin and EmpirumAgentSetup. The PE agent itself is installed with the first boot of Windows in the phase of the first log-on and removes itself after successful execution of all packages. Instead of using DHCP, a manual IP configuration can also be used for the operating system installation in the WinPE / Windows phase.
To do this, the IP configuration must be made in the client properties (EMC > Administration > Properties Computer > IP Address > Static) in the IP Address and DNS tab. The values entered here are then entered in the <Computer name>.ini file in the [MS_TCPIP] section.