As of Matrix42 Client Management v19.0.1, WinPE-based OS deployment supports Computer Self Provisioning, which allows computers to be set up completely automatically with operating system and software by employees without Empirum knowledge.

Deployment via the Empirum subdepot is currently only possible if the computer to be installed can connect directly to the Empirum API service of the Empirum Master Server.

If a USB stick is created on a Server 2012 R2 or Server 2016 or Windows Server prior to version 1703, offline sources cannot be added because these Windows Server versions cannot create a second NTFS partition. This feature is only supported from Server 2019 onwards. Alternatively, a current Windows 10 version with ADK 10 (2004) installed and Matrix42 Management Console installed can also be used.

Starting with WinPE PreBoot Support version 1.8.3 it is possible to perform Self Provisioning also via http(s).

WinPE-based Computer Self Provisioning introduces the concept of computer templates. This replaces the concept of Self Provisioning groups. Computer templates are placeholders in Empirum and can be treated like normal computer objects. They can be assigned to configuration and assignment groups like normal computers. Thus the target state of the new computers can be defined.

Computer templates can be created in the Matrix42 Management Console under Administration using the context menu in the left tree.

The New Computer Template dialog corresponds to the dialog for creating a new computer.
A special feature here is that the UUID and MAC address properties are not specified for computer templates. This information can only be specified by the respective computer at runtime of Computer Self Provisioning. These properties are therefore grayed out.

Once the computer template has been created, it can be assigned to an existing configuration group that has already been prepared for WinPE-based OS deployment. As described in chapter Create Configuration Group, the configuration group must be prepared. Thus, the following settings must be made:

As already described, the communication during Computer Self Provisioning with the Empirum Server takes place via the Empirum API. For this, the Empirum API service must be configured and installed on the Empirum Master Server via Matrix42 DBUtil.

For more detailed information about the services installation via Matrix42 DBUtil, please refer to the Matrix42 online help.

Currently, WinPE-based Computer Self Provisioning requires that the Empirum API service is configured with the HTTP protocol. This can be configured either unencrypted (HTTP) or encrypted with a certificate (HTTPS).

Use a user that has sufficient rights on the database. The user must have at least the roles EMP_M_COMPUTER and EMP_M_COMP_ROLE, which can be assigned to the user via Matrix42 DBUtil. SQL Server or Windows users are possible. If the PXE boot image creation has then been successfully performed, you can proceed with Self Provisioning on the Computer.

Currently, only the HTTP protocol is supported, which can be configured either unencrypted (HTTP) or encrypted with a certificate (HTTPS).

Activate Computer Self Provisioning on the Empirum Server

WinPE-based self-provisioning in its current state is intended for installation streets only and should not be used in production environments, where workstations cannot be booted locally unless they have been set up once before with the WinPE support version (1.6.3) or EPE support version (4.7.11).

With the help of the Offline Boot Medium creation, a USB stick can be created under Boot Configuration in the Empirum Management Console, with the help of which Computer Self Provisioning can be executed directly on the new computer via booting the USB stick.

As with EmpirumPE 4 based (EPE 4) Computer Self Provisioning, make sure that the following registry value is set on the Empirum Master Server (where the PXE service is running):
HKEY_LOCAL_MACHINE\SOFTWARE\Wow6432Node\matrix42\PXE\EPE4SP
TThis must be set to 1, or created (type = DWORD; value = 1).

Run Computer Self Provisioning on the computer

If the preparations have been made, Computer Self Provisioning can now be executed with a new computer. Booting can be performed either via the created USB stick or via PXE.

After selecting Empirum Self Provisioning, the WinPE-based environment is automatically started and the user is guided through Computer Self Provisioning. The following information is required for this:

After starting the Self Provisioning user interface, the necessary drivers are installed (1). Afterwards, a connection to the Empirum server is established (2). If the action was successful, this is acknowledged with a green check mark in each case.

You now have the opportunity to check all the information provided. 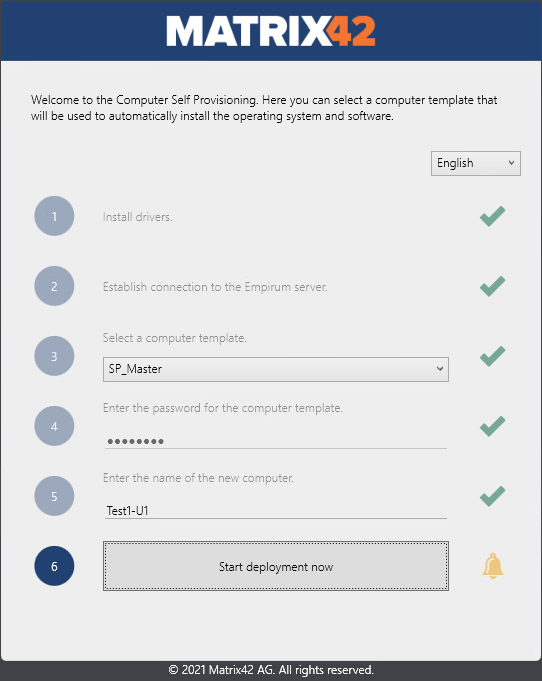 Self Provisioning via Depot Server (Offline)

The following requirements must be met so that self-provisioning can also be performed via a depot server (offline):

It is best to create a separate Empirum Agent Template for the Depot Server (Offline) (in this example "Agent_Depot").

It is important that the depot server (offline) has been selected as "Failure Server" here (in this example "Doku-Depot.QALAB.Matrix42.de").

For the standard WinPE boot image and for the self-provisioning boot image, the previously created agent template must be selected (in this example, "Agent_Depot"). It makes sense to create a separate configuration group here (in this example "SelfProvisioning"). To ensure that the configuration files are transferred (synced) to the correct depot server, you must make the following setting.

For a functional run, this configuration group must have the PreOS packages you need, an operating system import, a PXE boot image (default, no self provisioning), and a computer template associated with it. Optionally, language packages, the UEM Agent, and other software packages can be assigned.
All variables used here must also be set on this configuration group, especially the FQDN variable. The default boot image is required in case further reboots are necessary during the operating system installation.