A Configuration Item (CI) represents the entities in the system. It is a structural unit that combines heterogeneous data into an object, treated as a single entity. CIs identify the components of the system and consist of the  Data Definitions (DD) - independent building blocks that can be manually managed in the Administration application and have a physical representation in the database as tables.

CIs can be referred to as logical entities that describe the structure of the objects and put together different data structures for a specific purpose, for instance: an Incident, a Task, a Person, a user Account, a Service, a Computer, a Service Catalog, Currency, an Order Request, basically anything that is tangible or not and can be characterized by a number of attributes grouped within a single entity which is a Configuration Item.

Each CI serves as a structural unit that allows accessing and modifying the data of the database since, by design, it cannot be accessed directly through the Data Definition.

If you work with a dialog, you normally work with a CI. Also, Security and Imports are always based on CIs. The constituent parts of the Configuration Items - the Data Definitions - are used to compose the layout of the CI. You can define that the CI must necessarily contain data from a DD or you can make it optional. Also, the data of a DD can have multiple instances inside the CI.

One of the biggest CIs in the system is the SPSComputerType, it references 33 different DDs. It contains single mandatory DDs for the basic values of a computer like the SPSComputerClassBase and a lot of optional multi DDs for inventory items and other settings used by components like License management.

If you delete an instance of a CI from the system, all rows associated with the instance from the different DD tables, included in the CI, are deleted as well.

You may also construct these kinds of CIs with the standard Schema, include the same DD in all CIs, but with a "Simple CI Base" DD you don't have the overhead of the type table.

Created Configuration Items are used in the User Interface Layouts and as filtering conditions of the Actions.

There are two basic types of Configuration Items: Standard CI and Simple CI. The type of CI is defined once when the CI is created and cannot be changed later on.

Both types of CIs must include one or more Data Definitions. The main difference consists in the purpose of the CI and whether or not its components (DDs) should be reused in the other CIs. The DDs also have several types and result in specific restrictions according to their types.

Standard CI groups a set of heterogeneous data structures where, by design, each component can be reused as a part of other Configuration Item.

The example below shows a schematic layout of the Standard CI, where each block represents a database table: Simple CI usage is reasonable when the specified main Data Definition is not going to be reused as a part of another Configuration Item of either Standard or Simple CI type.

The main differences of the Simple CIs from the Standard CIs are:

The example below shows a schematic layout of the Simple CI, where each block represents a database table: 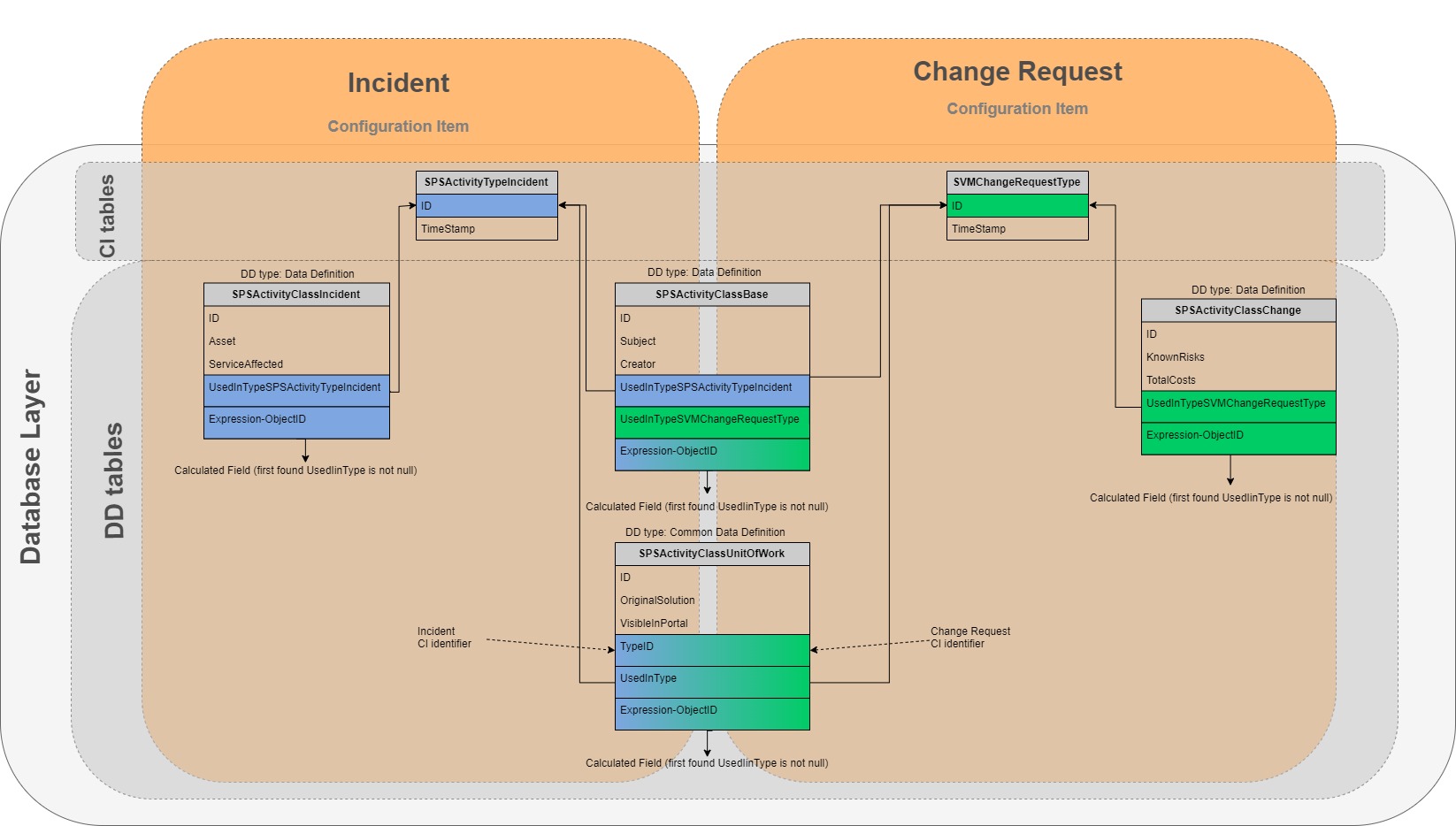 CI settings include two tabs, General and Advanced, and have the particularities as described below.

Common settings for any Configuration Item include: Most of the Advanced dialog page settings are related to Schema, and some of the data is related to business logic (e.g. the Support Multiple Currencies checkbox has nothing to do with the Schema and is not used by it but is nevertheless stored in the Schema): Optionally, define the icon and the position for the create a configuration item object action. The Create action is a generic action that is used on the Dataset View layouts.

A Configuration Item can optionally have a state that can be applied to each object, for instance:

Defined Object State characteristics are used as filtering conditions of the Actions: Status Values are suggested from the configured Object State properties for the CI:

Use these controls to set up auto numbering for items of this type (CI):

Every time a specified Data Definition item is created, an auto-incremental number is generated according to the pattern, specified in these settings:

The archiving of records is a basic feature of the Digital Workspace platform. It provides mechanisms to relocate records that are no longer needed to other areas of the database, thus relieving transactional tables.

However, business applications must explicitly implement this archiving function so that it is meaningfully integrated into the use cases. On the one hand, this concerns the consideration of logical relationships of the data and, on the other hand, user access to the archived data via navigation, search, and, if necessary, dashboards and reports.

In the current functional scope of Matrix42 Enterprise Service Management, archiving for incidents is implemented in the Service Desk application. Archiving of other configuration items is neither offered nor supported in the delivered applications. If the CI requires a special Role Permissions configuration that is not present on the wizard, it can be easily achieved after the CI creation with the "Set Permissions" action.

When the Configuration Item has been successfully created the wizard displays the Result page with the links to a just created CI details page and to the wizard "New Management Area" which allows automatically generate all required user interfaces for the CI: