The mapping takes place via the manufacturer name, the model name of a hardware and the assigned operating system source. Exactly this information is summarized in the Drivers.json file. The names for manufacturer and model are not arbitrary, but are as they are read by WinPE at runtime through the Windows Management Instrumentation (WMI) classes (gwmi win32_computersystem). This information can also be obtained by executing the Matrix42 PreOS package HardwareInfo.

Example:
The WMI model name is VMware7,1
Model names in the Drivers.json are VMware7 and VMware
Thus, the driver specified under the model name VMware7 is used, since this has a greater correspondence with the model names read out.

Determine the manufacturer and model

For this purpose, we provide you with the Matrix42 PreOS package HardwareInfo, with which you can determine all the necessary information, so that you can then enter it into the control file with the help of the Matrix42 Driver Wizard.

The Matrix42 Driver Wizard is a tool that can be used to customize the Drivers.json control file. The control file is used by the Matrix42 PreOS package DriverIntegration to determine the driver archive or driver directory to be integrated.

The current functionality of the Matrix42 Driver Wizard for WinPE:

The following restrictions apply when using the Matrix42 Driver Wizard for WinPE:

Make sure that the user who starts the wizard has sufficient permissions to open, edit, recreate and delete the Drivers.json file on the Empirum share. He should also have the permissions to copy files and directories there.

As soon as no DriverIntegration package with version lower than 2.15 is used anymore, the old Drivers.ini file can be safely removed from the server.
As of the DriverIntergration 2.15 package, the Drivers.json file is used to map drivers, but it is also able to manage the Drivers.ini file if the migration from INI to JSON has not yet taken place.

The driver file or directory information in the Drivers.ini file is then always automatically assigned to the Windows 10 operating system in the new JSON format.

When importing output from a HardwareInfo package, it is possible that it tries to import models that are already existing in the driver control file.
If the model information is identical to existing information, the following message is displayed indicating that no changes are necessary. However, if a model is imported that already exists and the driver specifications are different, the following message is displayed. If there are no HardwareInfo package outputs, the driver control file can also be expanded manually. For this the manufacturer name and the model name of a computer are necessary.

button behind the control file entry a new manufacturer entry can be created.

A new vendor entry with the default name NewVendorEntry is displayed under the structure. The vendor entry does not yet contain any model entries.

button behind the manufacturer entry, a new model entry can be created for this manufacturer.

A new model entry with the default name NewModelName appears under the manufacturer.

The model name can now be adjusted manually and a driver can be assigned to the entry or imported. In this case, the Precision 5520 model name was specified and the driver archive DELL_5520_W10.zip / DELL_5520_S19.zip was assigned to the Windows 10 and Windows Server 2019 operating systems.

If manufacturer (vendor) or model entries are no longer required, they can be removed via the

When removing model or manufacturer entries, the associated driver files or directories remain on the Empirum share. They are not deleted in the process. 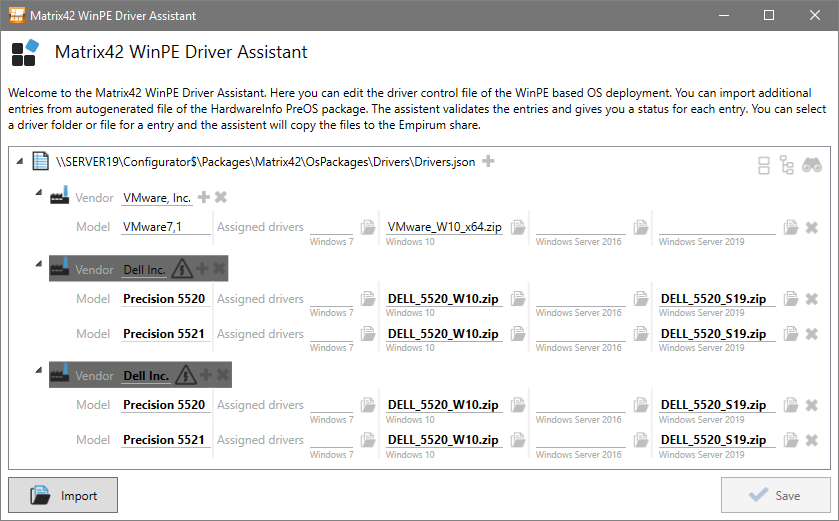 If there are conflicts in the control file, the file cannot be saved. The Save button is grayed out in these cases.

If the control file is expanded over time and thus gets more and more entries for different manufacturers and models, the view quickly becomes confusing. In order to still be able to find the right entries quickly, a filter function has been provided that can be used to filter out specific manufacturer, model or driver entries.